You are here: Home / News / Vaping and Dental Health

Vaping is quickly taking over as a “healthy” alternative to smoking, or at least that is what we are lead to believe.  E-cigarettes are relatively new to the market, they have been around for only 15 years or so, making the long-term effects fairly unknown.  Recent studies have found e-cigs/vaping to be just a harmful as smoking to the cells in your mouth.  Vaping can contribute to gum disease, tooth loss, and oral cancer.  As with traditional cigarettes, the vapor in e-cigarettes makes contact with your mouth when the vapor is the hottest.  This heat can irritate and cause damage to sensitive gum tissue.  Nicotine, often found in e-liquids, is highly addictive.  When you stop using it, you can go through withdrawal, feeling depressed and crabby.  Nicotine is a vasoconstrictor, which means it reduces blood flow to tissue, which inhibits the tissue’s ability to repair itself.  Research also shows it harms the developing brains of kids, affecting memory and attention.  Nicotine damages unborn babies and should never be used by someone who is pregnant.  The concerns with vaping/e-cigarettes goes beyond just the nicotine, some of the brands on the market contain formaldehyde and other ingredients used in antifreeze that can cause cancer.  Other brands contain diacetyl, a flavoring, that can be dangerous when inhaled.  Diacetyl is a well-known harmful chemical that causes lung disease called “popcorn lung”.  So even if you choose an e-liquid without nicotine, you are still inhaling dangerous chemicals that can cause cancer and lung disease. 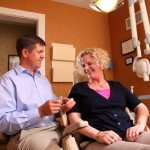 Coping with dental anxiety can be very difficult.  The reality is regular visits to the dentist … END_OF_DOCUMENT_TOKEN_TO_BE_REPLACED

"It was a pleasant experience. I appreciate the procedure being explained to me as it progressed."

"I have been coming to the office since the early 1980's. I have always been pleased with the excellent dental care I have received from the friendly, knowledgable staff. Thank you!"

Nothing but great experiences

"I have had nothing but great experiences with my dental care at Bomstad Dental. I have been a patient for six years, have had several procedures in addition to cleanings and I would recommend this office. The staff is friendly and capable."

Bomstad Dental
5
2015-02-12T15:03:23-06:00
"I have had nothing but great experiences with my dental care at Bomstad Dental. I have been a patient for six years, have had several procedures in addition to cleanings and I would recommend this office. The staff is friendly and capable." - Roberta P.
https://www.bomstaddental.com/testimonials/465/

They listen to my concerns

"Sandy rocks! I am always greeted by name. The team is very professional and they listen to my concerns."

I love this place